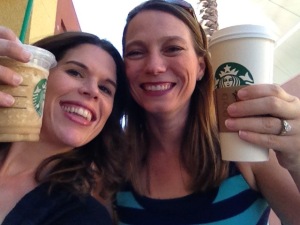 We are just two girls who have become close (I mean really close) friends over the years and experienced many moves between the two of us.  We know the struggles AND fun of moving   We came up with this idea because we know and have known so many women who struggle with moving and we want them to know they are not alone.  Plus we can share some of the fun stuff of moving as well!  Hopefully this blog will be encouraging to you whether it’s your first big move or your tenth.

About Angeline: I grew up and lived in the Midwest until after I was married.  I was born, raised and went to college in central Illinois.  If you aren’t from Illinois, you immediately think of Chicago when you hear Illinois, but there is actually a whole lot more to the state…I digress.  I lived in two small towns as I grew up.  I then attended Bradley University in Peoria, IL and graduated with a degree in International Business.  Clearly with that degree, I was no longer planning my great return to small town Illinois.  However, I did give it a good shot by working for a major Agricultural Giant that had me traveling all over the midwest including  6 months in Cedar Rapids, Iowa.  But the pull of the big city (well, mostly the pull of my college friends and my brother) led me to switch jobs and move to Chicago.  While working there, I met and quickly fell in love with my husband Steve.  We worked for the same company in Information Technology until I was pregnant with our first (of three) daughters.  Chicago is also is where we started our journey of moving together….Melbourne (Australia), Naperville (IL), Louisville (KY), Fort Wayne(IN), Marietta(GA), & The Woodlands (TX).  Some stays were short and some were long, but each one taught me a great deal.

About Kim:  I was born and raised in Texarkana, TX.  I lived in the same city, same house, same farm my entire childhood.    I went to Ouachita Baptist University in Arkadelphia, AR and graduated with a degree in Business Education.  That’s where I met my husband and started my crazy life with his career.  While living in Louisville, KY I earned my Masters in Education in Instructional Technology through the University of Louisville.  This degree has become particularly handy in wiping snotty noses and caring for 3 young boys close in age. HA!  I started staying at home when my first was born 10 yrs ago!  Wouldn’t trade it for anything, especially now that I look back on our journey in life with 6 moves under our belt.  At least that was one piece of stability for our family.

Our Story: You are probably wondering how two girls on opposite ends of the country could be friends??  Well here’s the story, told in third person, of how God created a beautiful friendship despite the distance.  Angeline and Kim both lived in Louisville, KY.  Both attended the same church and even the same bible fellowship class briefly until Kim and her hubby switched groups and also started leading 4 yr olds.  It wasn’t until 4 yrs later that Kim and her husband went back to that original group where Angeline’s husband was now the leader.  Their friendship started to bloom and they became closer through the next two years.  In 2008, Kim and her family found out they were moving to Louisiana.  Angeline offered to babysit Kim’s two year old boy (mind you she had girls) for the entire week while Kim and her husband house hunted in Louisiana (oh and it should probably be mentioned that he was in the process of potty training at the time). That probably sealed the deal on their friendship.  Soon after Kim had moved, Angeline found out her family was moving to Indiana.  That move is where their friendship grew into something more, something very special and God given.  They supported each other – laughed and cried on the phone together.  Now, with seven moves between the two of them, their friendship is more like sisterhood.